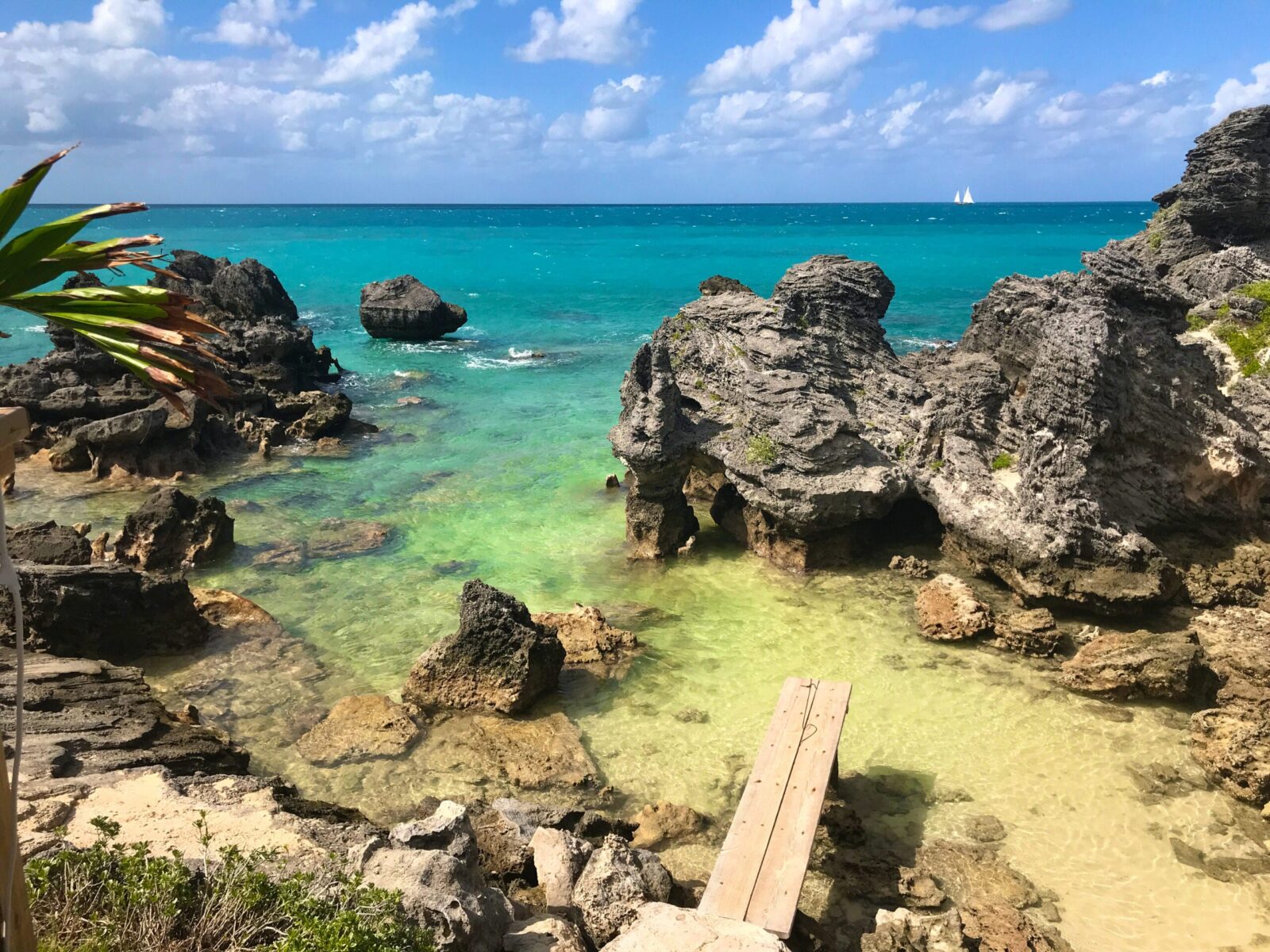 Bermuda is a British Overseas Territory in the North Atlantic Ocean. It is an adorable island with the most amazing turquoise oceans I have ever seen in my life. When I started on my traveling binge, I was determined to travel the world with the sole purpose of seeing as many beautiful oceans as I could, and this one by far takes the cake.

We had a very interesting trip to say the least. To say we had a very unexpected change in plans would be an understatement.

We were in Las Vegas on the airplane sitting on the runway, more than ready to get the necessary-evil of traveling out of the way so we could enjoy our vacation. While waiting to take off, we looked outside the airplane window and suddenly saw hundreds of people running frantically onto the runway. Some were running directly towards the plane, dodging and darting other people, clearly in a full-blown panic. No one on the plane had any clue what was happening. We were told we would have to de-plane. When we got back in the terminal, we were told that the entire airport was on lock-down and all flights were grounded. At one point, we heard there was a potential bomb in the airport. At this point the entire airport was in chaos. Everyone started getting on their phones to see if they could find any breaking news stories or anything that would suggest what in the world was happening. That’s when we found out the horrible news. The worst mass shooting in U.S. history had just happened across the street at the Mandalay Bay during the Route 91 Harvest Music Festival. Those people flocking onto the runway were trying desperately to escape to safety. Our hearts sank. Not only was this a horrific tragedy, but we had also planned on going to that very music festival. We opted to go to Bermuda instead. My heart and prayers go out to all of the victims in this horrible and senseless tragedy.

Eventually we were able to board our plane and get to our layover in New York. There is only one flight per-day to Bermuda. We missed our flight by 15 minutes. Considering the situation, we tried to look at the bright side. So, we booked a hotel and decided to explore New York. It was our first time there, so why not?

From there, being big “How I Met Your Mother” fans, we decided to check out Mcgee’s Pub.

And even though it was pretty late at night, we decided we had to go see Central Park. For the record, I do NOT recommend going to Central Park at night. Let’s just say it’s sketchy. But I had my husband with me so it was easier to act fearless.

It turned out to be the best decision EVER. As we were strolling through the park, we heard rustling in the bushes (a little hard not to be terrified considering the situation) and out pranced out……wait for it……RACCOONS. WHAT?!

Although our trip to NY definitely wasn’t in the cards, I’m glad we got to experience it for one night!

We boarded our plane in the morning and finally made it to Bermuda!

St George’s is an adorable and beautiful little island town. I cannot recommend staying here enough. There is so much to do, and you can walk to everything!

Located in historic St. George’s Parish on the island’s East End, Tobacco Bay Beach is a must-visit for anyone who wants to experience a quintessential Bermuda beach. There’s an awesome little bar located right on the beach!

Also called Sea Glass Beach, this beach is located just a short (and beautiful) 15 – 20-minute walk from the town of St. George’s, or a $10 taxi ride. This small beach is great for snorkeling and for picking up sea glass!

It is also located right next to Alexandra Battery, a fort constructed in the 1860s.

AKA Gates Bay Beach, gorgeous waters and soft white sand are what this beach is known for. Out of the city crowd, this lovely small beach is quiet and peaceful. Unlike Tobacco Bay which is located at a short distance away, this beach is not crowded. St. Catherine’s beach is located at the North Eastern end of St. George’s and not on a direct bus route. You can however walk to the beach from Kings Square (the town center of St. George). The entire walk is peaceful and the scenery is amazing.

Hamilton is the capital of Bermuda. A picturesque harbor city graced with shops, museums, galleries and gardens, the city is also a hub for local and international businesses.

And they have Moongates! I didn’t even know this was a thing! So, naturally, I made my husband do some selfie-timer photos. Because science. I have no shame.

Seals, turtles, fish, monkeys, birds, and the first living coral reef exhibit in the world: this complex offers a fairly complete survey of the natural wonders found in the Bermuda and islands of the world. They even rehabilitate animals!

Disclaimer: you cannot touch the animals. But I have no impulse control.

St. Peter’s Cathedral is the oldest surviving Anglican church in continuous use outside the British Isles. It is also reportedly the oldest continuously used Protestant church in the New World.

We took a bus out to explore the island and the many beaches! I HIGHLY recommend doing this. There are NO people. That means zero crowds, solitude, beauty, and one of the most amazing experiences of your life.

On the bus ride back into St George’s, my husband said “Wow, it’s a miracle that this bus can wind around these tiny roads without hitting the cement walls.” and literally, just after he said that, we feel a jolt, and the window next to us shatters. Yup, our driver hit a guardrail. Add that to our list of travel stories.

The views of Bermuda’s beaches are stunning and the sunsets are the most dazzling anywhere. But to see the most breathtaking views on the island, you must get down to the underground, and discover the astonishing wonders of The Crystal and Fantasy Caves of Bermuda. No wonder they are the most famous caves in Bermuda and called “Bermuda’s True Hidden Treasures” by visitors and residents alike.

And of course, it wouldn’t be a real trip if I didn’t hurt myself. Warning: the caves are dark

Blue Hole Park popularly known as Tom Moore’s Jungle (and also as Walsingham Nature Reserve) is located in Hamilton parish. The trail and many offshoot paths through the dense woodland area lead to different attractions within the reserve including caves & grottos with great stalactite formations and natural pools.

Warning: The caves are……well, dark. As you can imagine. Don’t be an idiot and hit your head, like me.

Blue Hole Pool: From the open grassy land with a picnic table on one side, you can see the steps to a small wooden platform (having an wooden bench on one side). Standing on the platform, you can soak in the serene beauty of Blue Hole pond with surrounding cliffs and greenery, and watch fish in the water.

Swimmers, photographers, sun-bathers, and everyone in-between flock to this beach. In fact, it’s one of the most instagrammed beaches in the world. Between the plush pink sand, the turquoise water, and the unlimited ways to spend the day, you’re sure to have a memorable experience.

No matter what you decide to do in Bermuda, you really can’t go wrong. All I can say is, just GO! Flights are the cheapest in their “off season”, which is generally October – March. We went in October and the weather was amazing. As far as places to stay, I highly recommend these Airbnb options in St George’s hosted by Sam and Neil!